Project on Availability:  'Same Day' Scheduling
Scheduling Patients is often called Access   To be truthful, Access can be divided into five catagories:
1. Availability:  I am sick and I need a same day appointment.
2 .Continuity: I want to see my doctor.
3. Access:  I want to be seen at a time and place of my choosing.
4. Affordability:  I can afford health care services.
5. Appropriate: Based on my condition, I am seen by the right person.

The 'Same Day' Project deals primarily with availability. How do we schedule those patients who need same day appointments?  Access alerts: Schedulers notify physicians via e-mail that there are no more slots, or patients are dismissed from the hospital and need to be seen right away or patients with a complicated illness are seen by someone other than their doctor.  Lack of access leads to lots of errors.

The team then examined the stability of the 'Same Day' system. (See above graph)  We plotted the number of patients who needed to be seen on a given day.  This number was determined by the schedule of appointments as of 3 p.m. the day before.  We saw spikes every five days. The spikes occurred on Monday or the day after a holiday.  We continued to plot and examine this data for three months. We also found that the day/time with the most unfilled slots was Monday morning.

Based on system stability (or lack thereof), we came up with the following intervention.  We would decrease variation by making Monday less hectic. Schedulers were told not to schedule any patients on Monday afternoons unless they were: 1. Hospital follow- ups
2. ER follow-ups
3. Newborn Follow -ups
4. Patients referred by a doctor stating they needed to be seen

Part of the results are displayed below. (Keep in mind that some 'Same Day' slots for Monday would have been filled on Friday afternoon.)
As can be seen:
1. There was in increase in the number of filled afternoon 'Same Day' slots.
2. ER patients and hospital follow-ups were seen by their own providers.
3. There was decreased variability in the schedule on Mondays through Thursdays.
4. Although Monday remained the busiest day of the week, fewer patients were seen on Mondays compared
with the other days of the week.
5. Patients, schedulers, and clinicians found Monday to be less error prone.  There was opportunity to
schedule patients later in the week  and have them seen by one provider.
6. Access alerts were essentially unheard of. Clinicians who had spent years complaining about availability
ceased. (Interestingly, we discovered 'sickness of provider' was a common cause of access alerts.)
7. After four months the system was declared stable.  The team then moved on to an examination of
Thursdays where we found the least number of filled slots. We started a program to add slots for
hospital ER patients as well as for newborn checks.

The 'Same Day' Project is now monitored monthly. We look forward to a year's worth of data which will help us to builod better schedules around holidays and other calendar driven events. 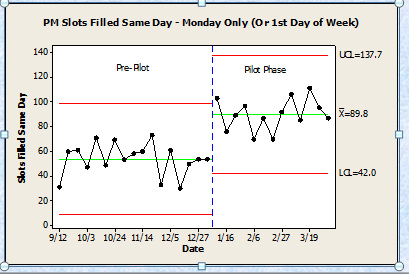 This shows Monday afternoons We had more slots filled in our group. These patients in the past were squeezed in or put off to the rest of the week
Project 2  Physician Satisfaction Scores
Ranking is a common thing to do.  In Quality Improvement we need to focus on process improvement. In spite of this we still see a desire to improve quality by ranking. (One of Deming's 14 points was not to rank people. People are unique and should be handled in a respectful way.)  The cover issue of Family Practice Management January 2016 had an article devoted to this:
http://www.aafp.org/fpm/2016/0100/p23.html

I also made an introductory video that shows that in some cases clinician's have a score that has poor predictability in the future. The vast majority of difference is related to randomness not the clinician.  There is a flash video on the site that you might wish to use: http://fast.wistia.net/embed/iframe/eyhxddn1wt